WILMINGTON, Del. - President-elect Joe Biden on Monday outlined his plans to alleviate economic inequality and boost the U.S. economy but said any structural reforms depend first on reining in the coronavirus pandemic.

“Once we shut down the virus and deliver economic relief to workers and businesses, then we can start to build back better than before," Biden said during remarks in Wilmington, Delaware.

Biden spoke about his plans to invest in infrastructure, technology and clean energy jobs, and create American manufacturing jobs by encouraging companies to make their products in the U.S.

Earlier Monday, Biden and Harris held virtual meetings with business and labor leaders — including AFL-CIO President Richard Trumka, General Motors CEO Mary Barra and Microsoft CEO Satya Nadella — and said that despite their differences, they were able to “come together around the same table to advance areas of common ground." The president-elect also said that unions would have more power under his administration, and he emphasized the contributions that unions have made to the middle class. 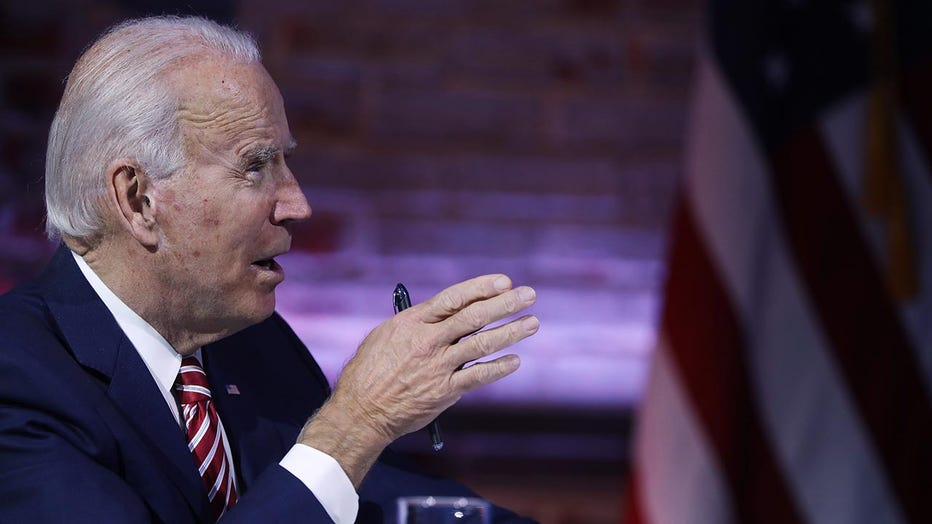 President-elect Joe Biden receives a briefing on the economy in a Zoom meeting with economic advisors at the Queen Theater on Nov. 16, 2020 in Wilmington, Delaware. (Photo by Joe Raedle/Getty Images)

Biden, a Democrat, has vowed to spend trillions of dollars to reinvigorate U.S. manufacturing, expand health care coverage and combat climate change, among other priorities.

But before he can pursue any large-scale reforms, Biden will first have to tackle the coronavirus pandemic, which is spiking across the nation and threatens to cause further damage just as the U.S. economy was rebounding from the initial surge of cases.

The unemployment rate dropped a full percentage point last month to 6.9% and those who still have jobs — many of them working from home — have stepped up their spending on cars, electronics and home renovations.

But much of the rebound was fueled by $2 trillion in stimulus funding that has largely run its course. And there are signs that the ongoing increases in confirmed virus cases are making Americans more cautious about traveling and shopping. Consumers cut back on spending in early November, according to JPMorgan Chase, which tracks spending on 30 million of its debit and credit cards. Spending declines have been larger in some states with severe outbreaks, such as Iowa and North Dakota.

The Commerce Department’s estimate of third-quarter growth showed that the nation has regained only about two-thirds of the output that was lost early this year.

Most economists support another round of stimulus, including loans to small businesses, extended unemployment benefits, and support for states and cities. Congressional Democrats have previously backed another $2 trillion in aid. But Sen. Mitch McConnell, the Republican majority leader, has pointed to the falling unemployment rate as evidence that much less stimulus is needed. Senate Republicans have backed just $500 billion in new spending.

Since winning the presidency earlier this month, Biden has not publicly weighed in on his priorities for a COVID-19 stimulus, but he said during the campaign he favors a broader package like the one Democrats have proposed. Biden spoke about the need for the stimulus during a joint call with House Speaker Nancy Pelosi and Senate Minority Leader Chuck Schumer last week.

One of Biden’s first major decisions related to the economy when he takes office will be whether to push a version of a nationwide lockdown to curb the spread of the virus. The president-elect has tried to sidestep the question, focusing most of his public remarks on encouraging Americans to wear masks and embrace social distancing measures.

But members of his coronavirus advisory board have been more specific. One member, Michael Osterholm, recently suggested a four- to six-week national lockdown with financial aid for Americans whose livelihoods would be affected. He later walked back the remarks and was rebutted by two other members of the panel who said a widespread lockdown shouldn’t be under consideration.

Speaking Monday on “CBS This Morning,” Osterholm was not asked about a potential lockdown, but he said the nation needs “a standard set of principles.”

RELATED: Trump says for first time that Biden 'won,' adds that he is not conceding