President Joe Biden said Wednesday he will withdraw the 2,500 remaining U.S. troops from Afghanistan before Sept. 11 of this year.

KABUL, Afghanistan (AP) - U.S. Secretary of State Antony Blinken made an unannounced visit to Afghanistan on Thursday to sell Afghan leaders and a wary public on President Joe Biden’s decision to withdraw all American troops from the country and end America's longest war.

Blinken sought to assure senior Afghan politicians that the United States remains committed to the country despite Biden's announcement a day earlier that the 2,500 U.S. soldiers remaining in the country would be coming home by the 20th anniversary of the Sept. 11 terrorist attacks that led to the U.S. invasion in 2001.

"I wanted to demonstrate with my visit the ongoing commitment of the United States to the Islamic Republic and the people of Afghanistan," Blinken told Afghan President Ashraf Ghani as they met at the presidential palace in Kabul. "The partnership is changing, but the partnership itself is enduring."

"We respect the decision and are adjusting our priorities," Ghani told Blinken, expressing gratitude for the sacrifices of US troops.

Later, in a meeting with Abdullah Abdullah, who heads the National Reconciliation Council, Blinken repeated his message, saying that "we have a new chapter, but it is a new chapter that we’re writing together."

"We are grateful to your people, your country, your administration," Abdullah said.

NATO immediately followed Biden's lead on Wednesday, saying its roughly 7,000 non-American forces in Afghanistan would be departing within a few months, ending the foreign military presence that had been a fact of life for a generation of Afghans already reeling from more than 40 years of conflict.

Blinken arrived in the Afghan capital from Brussels, where he and Defense Secretary Lloyd Austin briefed NATO officials on the U.S. decision and won quick approval from the allies to end their Resolute Support mission in Afghanistan.

Biden, Blinken, Austin have all tried to put a brave face on the pullout, maintaining that the U.S.- and NATO-led missions to Afghanistan had achieved their goal of decimating Osama bin Laden's al-Qaida network that launched the 9/11 attacks and clearing the country of terrorist elements that could use Afghan soil to plot similar strikes.

However, that argument has faced pushback from some U.S. lawmakers and human rights advocates, who say the withdrawal will result in the loss of freedoms that Afghans enjoyed after the Taliban was ousted from power in late 2001.

"My views are very pessimistic," Naheed Farid, a member of parliament, told reporters when asked her thoughts about the future of her country. Farid was one of a half-dozen, mostly women, civic leaders who met with Blinken at the U.S. Embassy in Kabul. She did not elaborate.

Despite billions of U.S. dollars in aid, 20 years after the invasion, more than half of Afghanistan’s 36 million people live on less than $1.90 a day, according to World Bank figures. Afghanistan is also considered one of the worst countries in the world for women's rights and wellbeing, according to the Georgetown Institute for Women Peace and Security.

For many Afghans the past two decades have been disappointing, as corruption has overtaken successive governments and powerful warlords have amassed wealth and loyal militias who are well armed. Many Afghans fear the chaos will worsen even more once America leaves.

At a news conference in the capital before leaving, Blinken said while America is drawing down its military force, it is stepping up its engagement with the Afghan government and people and would continue financial support for the Afghan National Security Forces. Washington pays a $4 billion-a-year bill to maintain Afghanistan's security forces. 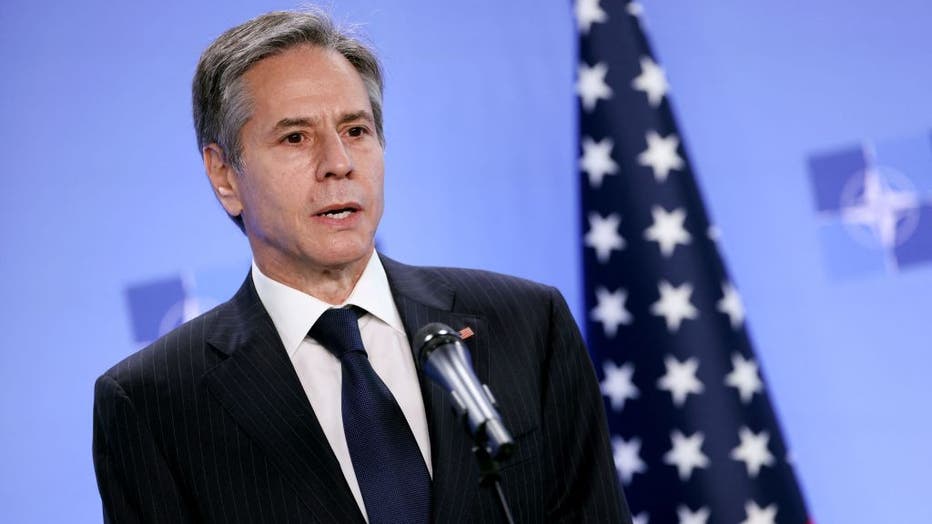 US Secretary of State Antony Blinken speaks during a press conference with transatlantic alliance NATO's chief on April 14, 2021 at NATO's headquarters in Brussels. (Photo by KENZO TRIBOUILLARD/POOL/AFP via Getty Images)

"Our partnership with Afghanistan is enduring. We will remain side by side going forward," Blinken promised.

Peace talks between the Taliban and the Afghan government are at a stalemate but are supposed to resume later this month in Istanbul, though the Taliban have not said if they will participate.

Blinken had stern warnings for the religious militia, saying it would never gain the international recognition it wants if it drives Afghanistan toward a civil war rather than embracing the peace talks.

"It’s important for the Taliban to recognize that it will never be legitimate and it will never be durable if it rejects the political process and tries to take the country by force," he said.

Under an agreement signed between the Trump administration and the Taliban last year, the U.S. was to have completed its military withdrawal by May 1. Although Biden is blowing through that deadline, angering the Taliban leadership, his plan calls for the pullout to begin on May 1. The NATO withdrawal will commence the same day.

The Taliban’s spokesman Zabihullah Mujahed warned Wednesday that "problems will be compounded," if the U.S. misses the May 1 withdrawal deadline. The insurgent movement has yet to respond to Biden’s surprise announcement that the pullout would only start on that date.

In a meeting with staff at the U.S. Embassy in Kabul, Blinken said he understood this was a time of "real transition" for the entire U.S. mission in Afghanistan and that it was "particularly stressful" because of the uncertainties raised by Biden’s announcement on top of the challenges they have already been facing, including the impact of the coronavirus pandemic.

Blinken also assured the mission's Afghan staff that a special U.S. visa program would be safeguarded. The program allows easier visa access for Afghans who have worked for the U.S. and as a result may have put themselves in danger.

In his announcement in Washington on Tuesday, Biden said it was "time to end America’s longest war." But he added that the U.S. will "not conduct a hasty rush to the exit."

Biden, along with Blinken and Austin in Brussels, also vowed that the U.S. would remain committed to Afghanistan’s people and development.

Austin said that the U.S. military, after withdrawing from Afghanistan, will keep counterterrorism "capabilities" in the region to keep pressure on extremist groups operating within Afghanistan. Asked for details, he declined to elaborate on where those U.S. forces would be positioned or in what numbers.