HOUSTON - AUSTIN, Texas (AP) - The economic damage in Texas from the coronavirus pandemic has left a nearly $1 billion deficit in the state budget. The forecast by Texas Republican Comptroller Glenn Hegar on Monday reflects how the nation's energy capital remains hampered by a slow recovery and a half-million fewer jobs than a year ago. The deficit could result in cuts to state services as the GOP-controlled Legislature returns to work Tuesday. Many economists say that once coronavirus vaccines are more widely distributed, a broader recovery should take hold in the second half of the year.

DALLAS (AP) - Federal prosecutors say a retired Air Force officer and a man from Tennessee have been charged for being part of the mob that stormed the U.S. Capitol. Retired Lieutenant Colonel Larry Rendall Brock Jr. was arrested in Texas and charged Sunday in federal court in the District of Columbia with unlawfully entering a building and violent entry and disorderly conduct on Capitol grounds. During the deadly riot Wednesday, Brock was photographed on the Senate floor wearing a helmet and heavy, vest and carrying a zip-tie handcuff. Also Sunday, Eric Gavelek Munchel was arrested in Tennessee in connection with the riot. Prosecutors say photos also show that he appeared to have plastic restraints.

AUSTIN, Texas (AP) - Texas health providers getting doses of the COVID-19 vaccine this week will include 28 providers that will focus on large community vaccination efforts, state health officials said Sunday. Texas is currently vaccinating health care workers, people 65 and older and those with medical conditions that put them at greater risk of hospitalization and death from COVID-19. The Texas Department of State Health Services said Sunday that the hub providers will get more than 158,000 doses of the vaccine this week. Johns Hopkins University researchers say more than 30,000 people in Texas have died due to COVID-19, the second-highest in the country.

BOSTON (AP) - Nancy Bush Ellis, a longtime Democrat who helped her Republican brother and nephew get elected president, has died of complications of the coronavirus. She was 94. She died on Sunday at an assisted living facility in Concord, Massachusetts, her son Alexander Ellis III told The New York Times. She was hospitalized on Dec. 30 with a fever and tested positive for the coronavirus. The George and Barbara Bush Foundation posted on social media that she was a remarkable woman who brought joy and light to the world. Although she was a Democrat for decades who backed environmental and anti-poverty causes, she was first and foremost fiercely loyal to her family. 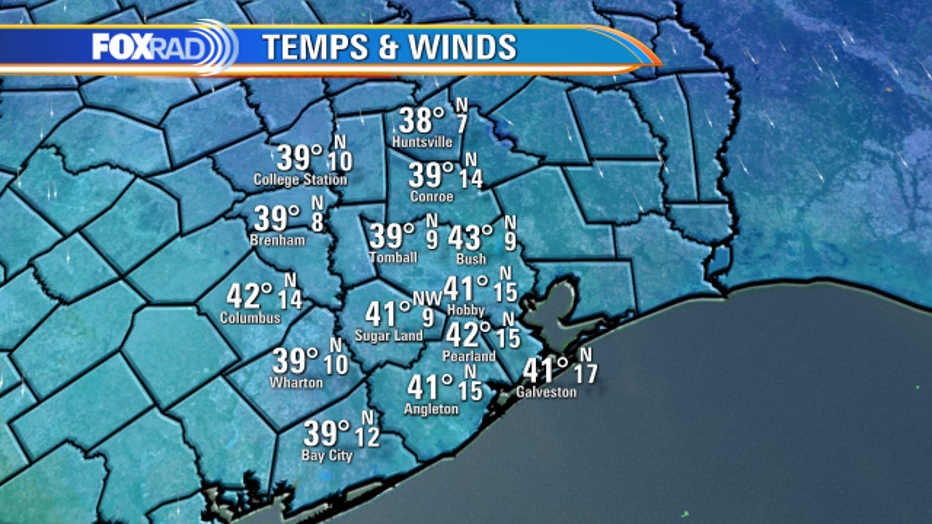 Houston just barely missed getting snow, but 4-6" of it fell from College Station to Madisonville. It will all slowly melt today as highs across Texas rise to the mid 40s. Prepare for a light freeze tonight, so protect pets and plants. The rest of the week stays chilly at night and seasonably cool during the day. The next best chance for rain arrives on Sunday.