FOX 26's Matthew Seedorff was at a Houston Astros watch party when the game went final.

SAN DIEGO - The Houston Astros have made a huge comeback in the American League Championship Series forcing a Game 7 after being down 3-0 in the series.

The Astros defeated the Tampa Bay Rays 7-4 in Game 6 on Friday night at PETCO Park in San Diego.

The Rays started the scoring in the bottom of the 2nd when Willy Adames doubled on a sharp line drive to center field scoring Brandon Lowe.

In the top of the 5th inning, the Astros bats got hot. 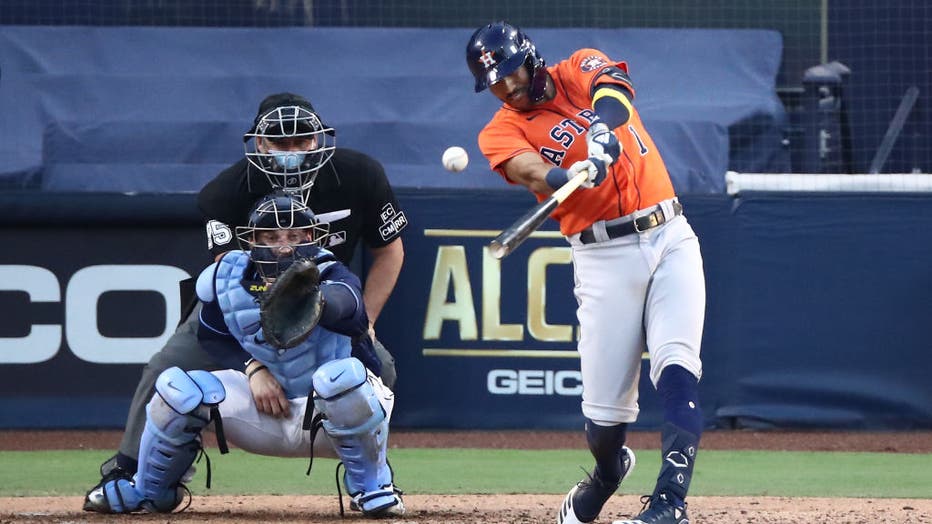 SAN DIEGO, CALIFORNIA - OCTOBER 16: Carlos Correa #1 of the Houston Astros hits a double against the Tampa Bay Rays during the seventh inning in Game Six of the American League Championship Series at PETCO Park on October 16, 2020 in San Diego, Calif

In the top of the 6th, Kyle Tucker hit the long ball to left-center field, extending the Astros lead to 5-1.

In the top of the 7th inning, Michael Brantley singled on a sharp ground ball to center field, scoring Jose Altuve.

Then Brantley scored on a sacrifice fly by Kyle Tucker, making the score 7-1.

In the bottom of the 7th inning, the Rays Manuel Margot homered to left field.

Then in the bottom of the 8th, it was Margot again with a two-run homer to left-center field.

Then in the bottom of the 9th, the game ended on a double play by the Astros that was reviewed, but the play remained as called.