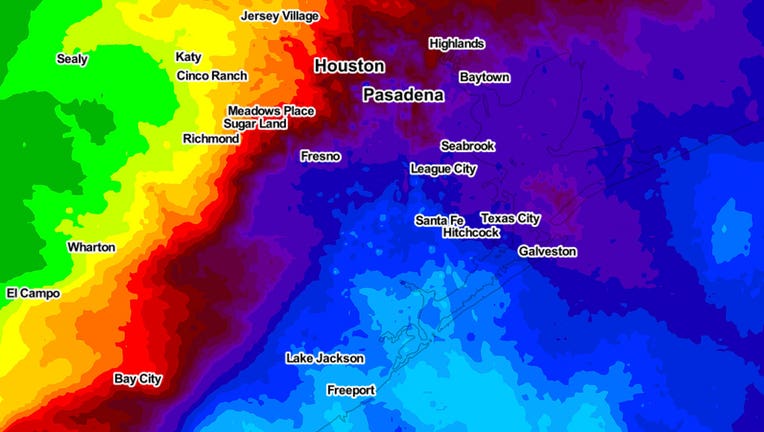 Estimated 24-hour rainfall totals for the Houston area are depicted on a map generated Sept. 14, 2021. The highest totals are shown in blue. (NWS/NOAA)

HOUSTON - Tropical Storm Nicholas continues its slow march across Southeast Texas on Tuesday after dumping heavy rain on parts of the region.

Nicholas made landfall about 12:30 a.m. Tuesday as a Category 1 hurricane near Sargent Beach, Texas, with winds of 75 mph.

While winds were an issue in some places, widespread heavy rain caused flooding in parts of the region.

In Houston, Hobby Airport reported 2.8 inches of rain as of 10:18 a.m. Tuesday. Bush Intercontinental Airport, which is the official reporting station for Houston, has picked up just over 2.5 inches in the past 24 hours.

Here’s a look at the 10 biggest rainfall totals being reported by the National Weather Service, so far:

More than 440K customers now without power due to Nicholas

Power outages are popping up across Southeast Texas, as Nicholas blows through the area, bringing high winds and heavy downpours.

Officials at the National Weather Service said they are working to verify an earlier report of 13.96 inches in Galveston before including it in the official record.

To view the full report from the NWS, click here.